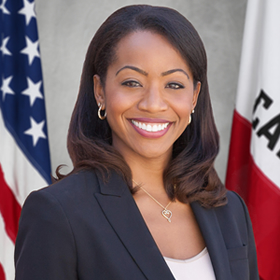 State Controller Malia M. Cohen was elected in November 2022, following her service on the California State Board of Equalization (BOE), the nation’s only elected tax commission responsible for administering California’s $100 billion property tax system. She was elected to the BOE in November 2018 and was Chair in 2019 and 2022. As Controller, she continues to serve the Board as its fifth voting member.

As chief fiscal officer of the world’s fifth-largest economy, Controller Cohen’s primary responsibility is to account for and protect the state‘s financial resources. Controller Cohen also independently audits government agencies that spend state funds, safeguards many types of property until claimed by the rightful owners, and administers the payroll system for state government employees and California State University employees. She serves on 70 boards and commissions with authority ranging from affordable housing to crime victim compensation to land management. Controller Cohen chairs the Franchise Tax Board and serves on the boards of the nation's two largest public pension funds, the California Public Employees’ Retirement System (CalPERS) and the California State Teachers’ Retirement System (CalSTRS) Boards, which have a combined portfolio of $750 billion. The Controller is one of eight statewide constitutional officials who are elected every four years in California.

As the BOE Board Member for District 2, she represented 10 million constituents living in all or parts of 23 counties extending from Del Norte County in the north to Santa Barbara County in the south. As Chair of the BOE, she led the effort to modernize California’s property tax system, provide guidance to the 58 county assessors on remote assessment appeals board hearings, and utilize property tax abatements to stimulate affordable housing. Controller Cohen also ensured that the views of all who came before the Board were considered carefully, with respect, civility, and courtesy.